Step Your Game Up! Rules of Engagement for the "Boys" 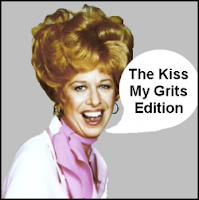 If I hear a grown man yell "Hey, baby!" at me one more time I am going to have a BF, for real.

Aside from the fact that I am a happily married woman, it's 2011 and that line is tired, lame, disrespectful and as a grown man if it's the only thing you can think to say, then you deserve to be single.

Heaven forbid some of these guys should venture to pull up their pants, brush their hair and approach a "woman" with a simple phrase like "Hello, how are you doing today?" or "Excuse me, Ms..."

In the 21st century where information is literally at your finger tips, there is no excuse for this type of ignorant behavior to still be in existence...I mean be for real.

Due to the fact that this has happened far too many times in the past few months for my liking, I have decided to offer up some advice for those of the male persuasion, the boys not men, who basically just don't have a clue.

1. DO NOT yell, "Hey, baby!" or any other disrespectful cat-call to any woman at any time...ever and expect a serious, non-confrontational reaction or stupid look. Don't get angry at her because if you were dumb enough to put yourself out there like that, you deserve it.

Instead of bombarding females with tired lines that only make you look immature, try approaching a "lady" (keyword here being lady) like you have some home-training and open up the dialog with some good conversation. You may be surprised at how far being charming and interesting can get you.

2. RESPECT THE RING! If a woman tells you that she is married...keep it moving! It is so annoying to have some random dude approach you and ask if you're married and then proceed to say, "So?", "Happily?", or even worse, "So am I," after you say yes! First of all, if I took the time to tell you I was married and didn't offer up any additional conversation that means respect my situation and either move on to some appropriate conversation or get out of my face.

Second, what kind of dog does it make you look like to be trying to push up on a married woman despite the fact that she just told you she was married?

3. PULL YOUR PANTS UP! No grown woman wants to be bothered with no wannabe thug who clearly doesn't understand the concept of a belt or accurate waist measurements.  Wearing your pants sagging to your knees really makes us wonder if it's really us you're trying to impress or if you're secretly batting for the other team. #justsaying

If you're over the age of 25, you're grown so act like it. It's time to put your big boy clothes on and get a clue. For real.

Though that's just the tip of the ice berg, those are some key first impression issues you can work on that may help you make a huge difference in your female response rating.  Try it and see.

And ladies, stop letting these guys approach you any old kind of way! If you demand respect then they have no choice but to eventually get the picture.

We know that there are a lot of men out there who do know how to treat a lady, so if this doesn't apply to you then please share it with someone you know that could benefit from it.

i love this piece and it is so fitting in this day and age.

Thank you, Fame! I appreciate the feedback.