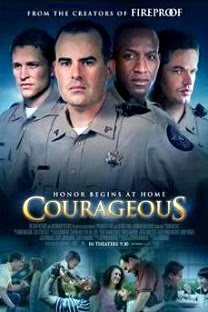 I'm going to start this out by saying that every father in America needs to go see the movie Courageous.  This film, starring, written and directed by Alex Kendrick, was a beautifully presented as a clear call to action for men to step up and fulfill their duties as fathers and leaders of their communities and households.
The story follows the lives of five friends, four of which are police officers, who are all fathers dealing with various issues in their personal lives.  When tragedy befalls one of the five, it forces him to take a close look at the kind of father he has been to his children. Bothered by the fact that he only felt that he had been "good enough" by his own standards, he begins to seek out God's standards and is heavily convicted by what he finds in God's word as it relates to a father's duties.

Driven by the desire to be a better father, he creates a resolution and presents it to his friends so that they will hold him accountable to be the man that he promises to become in his resolution.  After reading the document the other men decide to join him in his pledge.
This action sets off a chain of events that tests the faith and resolve of all the men, while forcing them to deal with their personal issues of loss, abandonment, forgiveness, financial hardship, guilt and integrity.

When this movie ended, there was not a dry eye in the house.  Alex Kendrick did a masterful job of tackling the position of fatherhood from every angle imaginable.  Whether it was the "baby daddy" who was running from responsibility, the effects of growing up in a fatherless home, the father who's in the home but spends no time with his kids...no situation was left untouched.
Real talk, Courageous is a movie that is definitely worthy of Oscar attention because it is the best movie I've seen all year.  The story's message is one of critical importance to our society and the acting was outstanding. And to see a movie that openly proclaims God's Word and message of salvation through our Lord and Savior Jesus Christ is nothing short of a blessing.
This one gets ten very enthusiastic spirit-fingers! Do not walk, but run to go see and support Courageous at the theater! Let Hollywood know that there is nowhere that God's voice can't reach!

www.black-smithenterprises.com
www.twitter.com/janayablack
If you want to see more faith-based movies and theaters, please considered supporting Someone To Watch Over Me.
Posted by Janaya Black at 7:17 AM

Great post Janaya! I saw it Saturday and was so inspired that I too posted my raw reactions in my blog. Hope you and your followers stop by for a visit at http://j.mp/opVrKa . I am now following your blog. Keep up the great blogging:)

Thank you for reading! I will definitely check out your blog!

What a great movie. This movie is excellent and crossed all my expectations. It is entertaining and delivers a very nice message.
Watch Courageous