Death and A Funeral 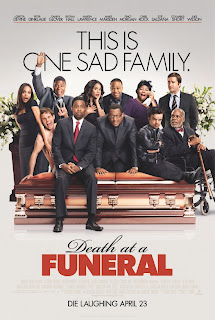 Comedian Chris Rock has returned to the big screen in the spring comedy release Death at a Funeral, a remake of the 2007 movie of the same name, and he brought an all star cast with him.

Death at a Funeral centers on a dysfunctional family that has lost its patriarch, and in keeping with his dying wishes the funeral is to be held at the family’s estate. And as the family begins to trickle in the problems seem to get bigger and bigger by the second.

Aaron (played by Chris Rock) and Ryan (played by Martin Lawrence) are two brothers who must overcome their personal issues long enough to bury their father. Not to mention that on top of everything else that’s going on Aaron, who is the oldest, has to deal with a wife who’s biological clock is ticking a mile a minute, a mother who is an emotional wreck, a wanna-be drug dealer cousin who can’t keep up with his supply, a grumpy uncle and an uninvited guest with a hidden agenda.

It would seem that an all star cast that includes the likes of Loretta Devine, Danny Glover, Tracy Morgan, Columbus Short, Luke Wilson, James Mardsen, Regina Hall and Zoe Saldana on top of Chris Rock and Martin Lawrence would be a surefire recipe for a blockbuster comedy hit, but this one fell a little short.

While at the end of the day the movie was enjoyable and had some laugh out loud moments, some of the comedic relief seemed a little forced and the chemistry between some of the characters could have been a little better.

Overall, I would have to give this one a solid C+. If you can catch a matinee or get the student or senior discount go ahead and knock yourself out, but I would pass on the evening full price ticket. If you want the most bang for your buck, pass on the theater and wait until it comes out on DVD.

P.S. It really seemed like Anthony Anderson should’ve been somewhere up in this joint, but oh well. Maybe next time.