Rules of Engagement for Radio

Recently, I had a chance to sit down with Cheron Mans, who is an on-air personality, as well as the music and assistant program director at Detroit's hottest urban station, WJLB FM 98. And during our discussion I got a chance to gain a lot of insight as to how the world of radio really works with respect why certain artists get played and others don't.

Much to my surprise, and contrary to popular belief, there is actually a method to the business of selecting which songs get airplay. And being the dedicated artist advocate that I am, I wanted to share that information with those aspiring artists who feel that radio just isn't showing them any love.

So here it is...do with it what you will.

Janaya Black: With all of your titles what do your duties entail?


Cheron Mans: Well, as far as middays, I’m responsible for doing my best to be number one during midday 18-34, which we’re doing really well. Thanks to the city, of course. So my job is to hold down the midday shift from 10-2pm. 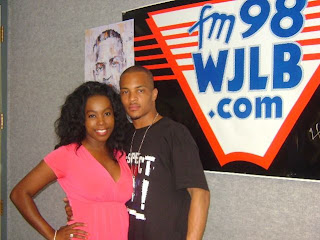 As far as music directing, basically I listen to music that’s submitted for airplay, make sure that clean edits are played on the radio, and I meet with record reps every week and they let me know what new music is out.


JB: How did you get into radio?


CM: I got into radio when I was in college at MSU in Lansing and I was studying engineering. I was really good in math and science in high school, and pretty good in college but I didn’t really want to do it. So, I kind of hit a cross-roads where I was trying to figure out what I really wanted to do and it was really, really difficult.


But long story short, like I said I’m from Lansing and the owner from the station there (the only urban station in Lansing at QHH), she goes to my church and she always supported me in Girl Scouts and Debutants and everything else, and she always told me if you ever need any help let me know. So I called her and told her my dilemma and she said that she may be able to hook me up with an internship and that she would give me a call the next day. She called that same day and offered me an internship to do news.


To make a long story even shorter, I started interning, I became a news director, co-hosted the morning show and Reggie Reg heard me on the radio in Lansing and he got me to do traffic here at WJLB. I then went on to do Quiet Storm and now middays.


JB: Your climb up the ladder; was it a tough one or was it a natural progression of things?


CM: Well, everybody has a different story. I’ve heard of jocks saying that they’ve slept in their cars, they’ve been to 12 different stations, they may have been at one station in their hometown and ended up getting an opportunity at a bigger station. I feel like even though I’ve had set backs throughout my career, I feel like I have continuously grown through it all. I’ve seen people come and go and I’m just really grateful to be in the business that I love. So I think it was somewhat of a progression. I can’t say it was easy, but I learned a lot along the way. So, I’m very pleased with it.


JB: In the 10 years you’ve been doing radio I’m sure you’ve seen a lot of shift with the way that things are done in radio because jocks had more control over what they wanted to play. What is your outlook on that?


But as far as it changing, it has changed but I think I recognized more of the change being on the side of being a manager and seeing how music gets selected. It’s a formula to why one song is played after the other and there’s a specific reason why. It’s not just because the PD puts it on the radio because that’s what he or she wants to hear. We do a lot of research on music that we do play.


Now we do have certain features, like Darius does Unsigned Hype and he does choose the song that plays. And What’s Next on the Menu with TJ, which I’m very proud to say that we have a whole hour dedicated to Detroit music.


Our mixers have the most freedom; they’re their own program directors. They play what they want to play. But as far as it changing, it’s always been that way since I’ve been in radio. Music was selected and it was programmed before the jock even hit the mic.


JB: I know you have local artists that come up to you all the time wanting to know how it works. How do you explain the process?


CM: That part is really tough because in this city we have a lot of talent. Although everybody claims to be hot, not everybody can possible be hot. So it’s best to put your best foot forward, and know the process, and know protocol.


Proper protocol would be you have to create your own hype because you have to remember that at the end of the day, the radio station is a business. I’m happy and so proud that we do the Unsigned Hype with Darius every single weekday, mixers play a lot of local music, we have local music in regular rotation, and we dedicate an hour on Saturday for that just to get it exposed. Now once it’s exposed it’s really up to that artist to really create hype around their song so that we have no choice but to play it. But we can’t play everything. So we do our best to keep our ear to the street to find out what really is hot.


Also when you do submit music for airplay you have to be serious about it because we can only do so much. We can play your song but if you’re not putting in the work to promote it, we would rather be behind someone who’s really serious and really plans on either getting a deal or whatever their plan is. But you have to have a plan.


JB: How does it make you feel when you hear people compare Detroit to Atlanta with respect to them feeling like Detroit radio does not support their own?


CM: I don’t understand how anybody can really say that. I can’t speak on anyone else, I can only speak on what we do, but I think we really do a good job, probably more than others, on exposing Detroit music in the ways that I just outlined.


It’s not even just about Detroit music. We can’t play unfamiliar or new records all day anyway. That’s why you only hear 1 or 2 new records an hour. Whether it be a national or someone who’s from Detroit. When you play a lot of unfamiliar music it turns people off. People turn the radio on to hear their favorite songs. That’s why it’s even more important for someone who doesn’t have the marketing and promotional backing that a national artist would have to make sure that they do the best they can to create a buzz, because you may think that everybody knows you because you have 500 people at your shows and they’re all singing along, but we’re talking about millions of people.


JB: What advice do you have for aspiring radio personnel?


CM: I would say get on your grind because the jobs are limited and shrinking. But that’s not to discourage anybody because if I can do it, anybody can do it. I would say experience is everything. Networking is everything. So if you can get an internship do so, and when you get an internship show up on time, dress appropriately, and even work when you’re not scheduled. If you see a story that can help that jock that you’re working for, send it in so you can be a standout because that’s a really good way to get into the business; by having an internship and then hopefully being around when a position becomes available because nine times out of ten, that’s how you really get in, especially when you’re talking a bigger market like Detroit. It’s difficult to get into a big market with no experience. The other alternative would be to go to a smaller market to get a start and come back to a larger market.


JB: What is the motto that you live your life by?


CM: Do onto others as you would have them do unto you. You don’t want this business, or certain things, to change you. You always have to remember who you are no matter what you do.

Cheron can be heard weekdays from 10am-2pm on FM WJLB and you can follow her on Twitter at twitter.com/CheronOnAir.