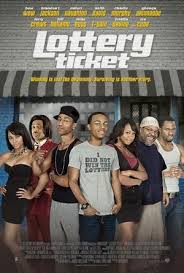 Bow Wow is back in his third big screen starring role in Ice Cube's new movie Lottery Ticket. This all-star cast production takes a comedic look at how people's lives can change when money gets involved.

In Lottery Ticket, Bow Wow plays Kevin Carson, a high school graduate, who by all practical appearances seems to be a responsible young man who is focused on working to help keep the bills paid at his grandmother's house. Until one day as luck would have it, what seemed to be the worst day of his life turns out to be the best day of his life when his number falls in the $370 million lottery. 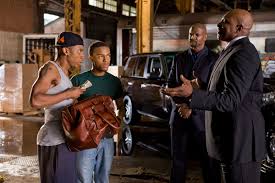 Due to the fact that the day he goes to claim his winnings falls at the beginning of a long holiday weekend, Kevin is faced with the task of trying to figure out how he's going to hold on to the winning ticket, and his life, until the claims office reopens on Monday. And in midst of all this, somehow the entire neighborhood, including the neighborhood thug Lorenzo, finds out about his winnings and now everybody wants a piece.

With stars like Ice Cube, Brandon T. Jackson, Loretta Devine, Terry Crews, Mike Epps and Charlie Murphy one would walk into this movie expecting to be doubled-over from side-splitting laughter but unfortunately that wasn't the case; for me anyway.

While Lottery Ticket did have it's funny moments, I still left the theater a little disappointed that it wasn't as funny as I thought it was going to be. And for some reason when it came to the comedy relief, it just always seemed like Brandon T. Jackson tried way too hard to be "that guy".

Even though the overall message was endearing and the acting was believable, there was really nothing memorable about the film. I would have been totally cool waiting to see this one on video from the comfort of my own home.

So, at the end of the day I give Lottery Ticket a solid B-.


Visit us at www.black-smithenterprises.com for more information on upcoming events!
Follow me on Twitter at twitter.com/janayablack.
Posted by Janaya Black at 3:32 PM

Really? I haven't seen it yet but I plan on it. My husband is always buying lottery tickets so I thought it would be a riot to see it. LOL.