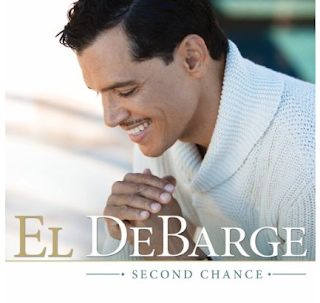 When 80's heartthrob El DeBarge made his triumphant comeback appearance on the 2010 BET Music Awards, women (and men) everywhere made haste to dust off CD, cassette tape and record collections boasting timeless hits such as All This Love, Love Me In a Special Way and I Like It from an era of when music was, well...meaningful.

Fresh off the ordeal of serving a drug-related prison stint, El DeBarge has resolved to reestablish his claim on his life, his music and his career. And from the looks of things, it appears that he is off to a very promising start.

I got a chance to sit down with him to find out about his battle with addiction, his new outlook on life and second chances.

Janaya Black: Tell us how excited you are about your new project and it being your first album in 16 years.


El DeBarge: I'm very excited. Like Tony the Tiger would say, "I feel grrrrreat!" I'm so happy to be back and back on scene.

JB: Tell me about the new album.

JB: The title "Second Chance" obviously has a deep meaning for you...


EB: It has a very deep meaning for me. It's a song of thankfulness, gratefulness, redemption, the triumph of the human spirit, what God has brought me through and me realizing that this is my second chance that He's given me.

JB: When did you get to the point where you knew that you had to turn your life around to get back to where you wanted to be as a person and as an artist?

JB: Well, congratulations to you for overcoming that.

JB: What's your favorite song on the album right now?

EB: My favorite song on the album is I Just Want to Lay With You, the duet I'm doing with Faith Evans and the one I do with 50 Cent, Switch Up the Format. I like those two a lot.

JB: Between 16 years ago and this album, what is it that you like and dislike about how the industry is right now?

EB: I like a lot about it. I have more pros than cons about the industry. I think it's evolving. Music is teaching the industry how to evolve and how to fit into music's format. You know people change, things change, people's appetites change. Music is still, to me, the voice of God...an international language known to all mankind. It just feels really good. I don't really have any qualms about it.

JB: Do you foresee a DeBarge reunion in the near future?

EB: My family has given me their 100 percent support. Even more than that they just want me to just do what I'm doing. They told me, they said, "El, do you. We got you, don't worry." They said they would let me know when they're ready to do something. I'm just waiting on them.

JB: So are there any plans for any reality shows or anything like that?


EB: I don't know, it could happen there's a lot of reality going on. It could happen, but I did hit the big screen already with something that will be out next year it's called Jumping the Broom with Paula Patton. I play myself in the movie where she always wanted to meet me because I was her favorite artist, and her fiancé proposes to her in Lincoln Park in New York and to her surprise I'm sitting there on a baby grand piano with an orchestra around me in the middle of the park, and while he's proposing he drops down on one knee and I start singing a song to her for him.

JB: Awww! So you've been bitten by the acting bug?

EB: Well you know what? It's like that's my entry to it, so we'll see what happens after that.

For more information on El DeBarge and his upcoming appearances and projects, please visit www.eldebargemusic.com or follow him at twitter.com/eldebarge.

Thank you for stopping by!