Detroit Filmmakers: Get in Where You Fit In

On Dec. 31, 2010, Specs Howard and Global Pictures will present the 1st Annual Michigan Film Gala at the Sheraton Detroit Novi Hotel.  This event will be hosted by Detroit's own Brandon T. Jackson and will feature appearances from a host of other Hollywood film industry play makers such as Tanya Ryno (producer of Saturday Night Live), Rod Harrell (RLH Talent), Ruth Daniels (Executive VP, Emagine Theaters), Darryl Farmers (Willow Smith producer and Disney composer), and laundry list of others.

So, fellow filmmakers or enthusiasts, why do you need to be there, you ask? Because if you are really serious about taking your film making platform to the next level, this event will afford you the opportunity to have access to people from every aspect of the film making process at your disposal. And if you choose not to take advantage of it, then you should never again complain about what resources are "lacking" in Detroit.

Ever since the film incentives have been rolled out in Michigan, local independent film makers have felt slighted because most of us don't have access to enough money to actually take advantage of them and when the hiring is done, somehow we still aren't getting a shot. But now, Specs Howard and Global Pictures have gone out of their way to make sure that Detroit film makers get their fair chance at bat by bringing in the people who can provide that missing link: a relationship.

This gala will feature interactive Q&A panels and film screenings during the day and a star-studded New Year's Eve party that evening...what more could you ask for?

I know first hand from conducting a film festival for the past 4 years, sometimes it's difficult to get Detroiter's to latch on to positive things that can actually benefit them. But after seeing how many film makers have benefited from our efforts, we continue to press on for our city.

So, with that being said, please don't miss out on this wonderful opportunity. The ticket prices are reasonable and with most packages you get a room at the luxurious hotel in addition to the panel, workshop, party and dinner. You can't beat that! So film making Detroit, please take advantage of these opportunities because if we don't, the industry is going to pack up and leave again and we'll be stuck with a bunch of "I should'ves". 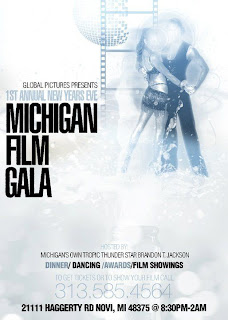