The Karate Kid is back with a vengeance! The 2010 remake of the original pop culture classic of the same name from 1984 that starred Ralph Macchio and the late Pat Morita, turned out to not be a disappointment.

Dre Parker, played by Jaden Smith, is forced leave everything he has ever known behind when his mother Sherry’s, played by Taraji P. Henson, job is transferred overseas to China. While he tries his best to be a good sport for his mother and give their new living situation a fair shot, all bets are off when he starts getting terrorized by bullies at his new school. 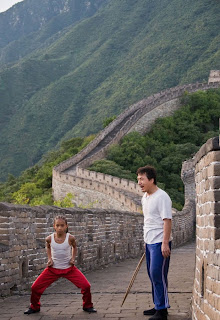 In the midst of ducking and dodging his middle school kung-fu master tormentors, he manages to find a friend in a young girl name Meiying (who just happens to be the object of affection of his main adversary), and an unlikely ally in the seemingly aloof maintenance man, Mr. Han, played by Jackie Chan.

If you’ve ever seen a Karate Kid movie, you pretty much know how the plot plays out from there.

In this rendition of the movie I have to give major props to young Jaden Smith. That young man did a phenomenal job in this movie. I can’t even begin to imagine the type of training he had to go through to prepare for this role. His training scenes were well portrayed and realistic, his acting was believable, and his fight scenes were very well executed. And then to take into account the amount of dedication he had to have to see the project through to the end. Sure, super star mom and dad Jada and Will’s guidance had probably had a lot to do with it, but at the end of the day it was up to Jaden to get the job done.

Jackie Chan also gets a major kudo for his role in this project. While we already know that Chan is a masterful martial arts craftsman, he showed a whole different facet to his acting ability in this film. I have to admit that a shed more than a few mommy tears during this one.

So overall, The Karate Kid gets an enthusiastic ten spirit-fingers. This is a feel good movie with more than a few morally wholesome messages that the entire family will enjoy.
Posted by Janaya Black at 7:48 PM