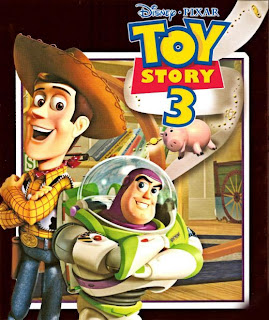 Woody and Buzz Lightyear are back in the third and final installment of the Disney hit mega-series, Toy Story 3.

This time around Andy is all grown up and is preparing to go off to college. As he prepares himself for his transition, his mother insists that he get rid of his unused “junk” before he leaves. So naturally, the first thing she looks to him to get rid of, store, or donate are his favorite old toys that he hasn’t played with in years.

Once the toys get wind of the fact that they may be stored away in the attic, or even worse set out on the curb, they immediately begin scrambling to come up with a plan of action. One mishap and misunderstanding later, the toys find themselves in a bad situation. What ensues is an action-packed adventure that is synonymous with everything that is Toy Story. 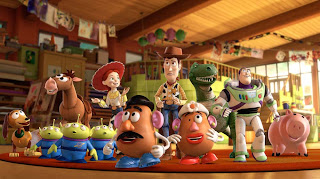 Woody, Buzz, Jessie, Ham, Rex, Slinky Dog and Mr. and Mrs. Potato Head all find themselves in a daycare that, for all practical purposes, should be heaven for an old toy. Dazzled by the laughter of children and the colorfulness of their new surroundings, the toys find themselves being won over by the prospect of being in a place where they will never be tucked away on a shelf again. Meanwhile Woody, ever the loyal toy, tries his best to smooth everything out and convince his friends that they have to get home by trying to make them understand that Andy loves them and would never throw them away.

After deciding to try their luck at the daycare, Woody resolves to find his way back home to Andy. In the meantime, the toys quickly find out that everything is not as it seems when the head honcho, a crazed bear named Lotso, sentences them to endure toddler torture.

Without giving too much away, I have to say that this installment definitely kept me entertained. It had excitement, comedy and even a few touching moments; not to mention that the interaction between Ken and Barbie was hilarious. Tom Hanks and Tim Allen have a great chemistry with their respective characters, and the supporting cast did much to add to the Toy Story 3 experience.

Overall, I give Toy Story 3 a very enthusiastic ten spirit-fingers! It’s a great movie that the entire family can enjoy together. And now days with all the questionable things that surround much of the subject matter that you seen in movies, that’s saying a lot.

Hey! This is going to be a great idea. I must add this movie to my watch list. Last year my kids exhausted all the series by Andy Yeatman that was available on Netflix and therefore, I am looking for more shows and movies this year. It was nice coming across this post.