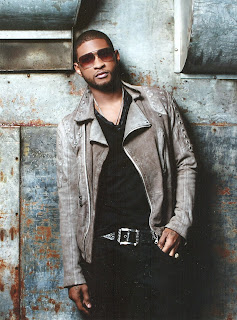 Check out my recent round table interview with Usher Raymond as seen in the Michigan FrontPage!


After a harrowing year of divorce and media-frenzy, GRAMMY award-winning artist Usher Raymond has been flying high on the wings of all that is celebratory after topping the Billboard charts with his newest album release, Raymond Vs. Raymond, and the feeling of accomplishment in the midst of the successful launch and continuation of his New Look Foundation for kids.

During a brief stop in Detroit for the 12th Annual Ford Freedom Awards, where he was named “The Dream Maker” in recognition for all of his outstanding achievement and philanthropy, the FrontPage got a chance to sit down with Usher to find out more about his “new look” and what it means to carry the title of being a “dream maker”.


FrontPage: What do you say to young people to let them know that they can and should aspire to do something other than being an entertainer, actor or athlete?

Usher: Well, my being here is a sense of dedication to something and that’s really what I hope to convey to them, that if there’s something your passionate about you should be willing to spend the time and be patient in dealing with whatever it maybe. This is hard work and a lot of times when kids are able to find motivation in what they seek, they understand better as a result of physically being able to see something. Most of the kids who are inspired are inspired by looking at the television seeing the basketball players fly down the court, or either turning on the television looking at a video, or looking at a red carpet interview or whatever it may be. I just hope to speak to them in a way of simply planting a seed today for a harvest, not quick, but one that will speak to who they ultimately want to be.


FP: Is there a correlation between what you’re saying now and the comments you reportedly made about American Idol and leap-frogging into success?

Usher: Well, often sensationalism has given us the perception that things are one way; that things are easy to come by. As I said, them being able to physically see the hard work that goes into what we do as philanthropists and what we do as artists, they don’t get a chance to come behind the scenes. But at least I can talk to them about it, answer questions and show some sense of patience.

Just to speak to the comments that were quoted in the media about me and my opinion of American Idol, I, like some other people, was of the opinion that American Idol was not the real thing. [It] was a quick fix. You look at television and you see that an artist is on television [you think] they can make it over night. It doesn’t happen that way. That’s why I was honored to be able to mentor kids, and not just kids but young adults, and show them aspects of mastering the game, of mastering this industry, and understanding the nuances that come with being an entertainer. It’s not just walk on the stage and sing and that’s it. You really have to understand stage presence. You have to understand how to connect and identify with the audience that you’re playing to, how to connect through music, through melody, through passion…that’s the heart of things that you don’t get to see through reality TV.

FP: What was your incentive behind launching an organization to educate youth about the entertainment and sports?

Usher: Well, I am the DNA for what I’ve created. As a result of having this incredible story that started from entertainment that really started from a dream, then passion and then success in music, and then a business man, and then a philanthropist and entrepreneur. To begin to engage them in that way, I feel like I’m speaking to the same kid who was 6-years-old who said, “I want to do that!” Well, here are the tools that you need in order to succeed in becoming that.

FP: Being as young as you are, how does it make you feel to be given the title “The Dream Maker”?

Usher: I love that. To be a dream maker or someone to help kids catch up to their dreams or be able to help them begin to shape these dreams into reality is, as I said, what I am. I’m a living product of it, so they can do it as well. This is part of the reason that with this 501(c) 3 that I’ve decided to go and mentor the least likely to be heard, because there lies some of the greatest most difficult, complicated stories that you have to deal with but yet they’re the most likely to succeed if you just give them the opportunity for their voice to be heard.


FP: What do you tell kids to do when it’s hard to believe?

Usher: That with the good comes the bad in life; there are high peaks and low valleys. But one thing that I told the kids as an entrepreneur, the first thing you’ve got to do is have a dream. Align yourself to your passion, create a plan and know that there will be high peaks and low valleys. Don’t stray from it if this is something that you are truly connected to and passionate about.

FP: How do you encourage young people to get involved in service?

Usher: I too am a believer that service makes a difference. The sheer statistics here in Detroit where we had an I Can’t But You Can campaign, where we allowed the kids through service to mentor adults about the voting process. The one thing President Barack Obama asked me personally was to educate our youth and give them a voice about understanding the voter campaign. So we decided to do something that would allow them to understand and that they could also be passionate about. Obviously, this president would impact their lives, so we gave them a voice through service to make a difference.

FP: What advice do you give to Justin Bieber?

Usher: Justin is a whole different story. This is a kid who, with the support of his mother, was daring enough to believe that someday all of his hard work of teaching himself single handedly to play drums, having gotten familiar with how to play piano and guitar, and listen to the radio and lean the lyrics and go out and sing about it and put it online…that right there was just unique in itself, which is why I wanted to be involved with the maturing of who he is and who he would become. The one thing that I always tell him and anybody is don’t be short-sighted. You have to understand that life is long and the story that is told then it of peaks and low valleys. Enjoy the high peaks but understand and appreciate the low valleys.


FP: How does it feel to be honored for something outside of music?


Usher: It’s right on time that in some way while you’re doing other good work, shall I say God work, things are getting taken care of.