Halloween: What does it really mean? Check out this commentary I did a couple of years ago for a Michigan publication about Halloween. Just an informational piece to remind folks of what is really being celebrated on Oct 31st. Be blessed.

Each year, millions of people look forward to this time of year when they can dress up in costumes and celebrate all that is scary. Haunted houses, horror flick mania on TV, trick-or-treating and lavish parties are all indicative of the Halloween season that Americans have come to know and love. But what does it all really mean?

It seems that in today’s fast-paced society, the true ideology of many of the traditional holidays celebrated in America have become lost, thereby allowing their actual meanings to fall by the wayside. But it stands to reason that if people knew the true meaning and origin of some of the things we celebrate, views may be somewhat altered.

Halloween, which is now essentially viewed as a childish holiday, originated over 2000 years ago in Ireland and was known as the festival of Samhein (pronounced “sow-in”). During this festival the Celts celebrated their new year, which was Nov. 1. The Celtic New Year marked the end of the summer and the beginning of the dreaded cold months which were associated with death.

The Celts believed that on the night preceding the new year the boundaries between the world of the living and the dead became “blurred.” So on the night of Oct. 31 they would celebrate Samhein, which is the time they believed that the spirit world returned to the earth to claim the bodies of the living. And many of the rituals they practiced were in effort to protect themselves from these evil spirits. 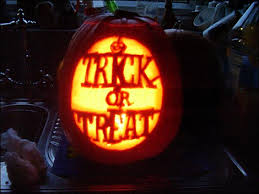 “Trick or treat,” give me something good to eat

Every year, parents dress their children up as cute and cuddly little ghosts and goblins so they can parade around the neighborhood going door-to-door collecting sugary treats. But the tradition of trick-or-treat tradition stems from a Celtic practice of fear. The Celts would leave fruit, nuts and other fine foods on their doorstep on the eve of the Celtic New Year in effort to appease evil spirits. This was done out of fear that the returned spirits would wreak havoc on their crops and livestock if gifts were not offered.

Wearing of masks and costumes

During this celebration, the Celts believed that in addition to the spirits of loved ones, evil spirits could also cross over into the land of the living. So in order to protect themselves they would wear masks because they believed that by masquerading as part of the spirit world they would be able to confuse the demonic spirits and cause them to bypass their homes. This is where the tradition of dressing up for Halloween comes from.

The jack-o’-lantern is the festival light for Halloween and an ancient symbol of a damned soul. Originally, the Celts would carve demonic faces into turnips or beets to frighten off the evil spirits. When the Irish immigrated to America, turnips were not in ready supply so they began to use pumpkins.


During this new year celebration the Druids, Celtic priests, would light large fires on sacred hilltops on the eve of Samhain to offer sacrifice to the spirit world to ward off sickness and bad fortune. Often during these sacrifice rituals, animals, and sometimes children, would be burned in these fires, which were called “bone fires” because of the bones that would remain when the fire was extinguished.

After the fire died, it was considered good luck to carry an ember from the bone fire to relight the home hearth fire. Today centuries later, “bone fire” has been condensed to bonfire and millions gather around them each Halloween to tell scary stories and roast marshmallows.


The infamous black cats, which are often depicted in various Halloween scenarios, were thought to be incarnates of evil dead souls.


Bobbing for apples was considered to be a ritual of fertility. For the Celts, the apple was symbolic for the fertility goddess Pomona and when an apple is sliced in half the seeds form a pentagram, which they believed to be a symbol of fertility. So during the festival, young unmarried people would try to bite into an apple floating in water or dangling from a string and the first person to successfully do so would be the next one to marry.


In addition to these, during the month of October horror and slasher films infiltrate television screens night after night, vicariously drumming violent and gory images into the minds of millions of young people. Haunted houses amass millions in revenue by putting carnage, gore and mutilation on display for eager viewers. Children have become desensitized to the violence and mayhem that is readily exhibited during Halloween.


This is insight to just a few of the practices that take place during the Halloween season. In addition to what has been embraced as a good old-fashioned American fun pastime, Halloween is one of the biggest holiday celebrations for those who partake in the occult.


For those of Christian faith, it is a huge compromise of the basic foundation of the Christian belief to partake in a holiday with such an openly occult background. In fact, this country’s Pilgrim forefathers originally banned the celebration of Halloween because they were well aware of its roots in the occult. Halloween was not celebrated in this country until 1845, when Irish immigrants migrated to New York during the Irish Potato Famine.

So in essence, it is imperative that we examine and understand the things that we take part in and expose ourselves to because everything that appears to be innocent and fun is not.
Posted by Janaya Black at 11:57 AM