Net-work-
an association of individuals having a common interest, formed to provide mutual assistance, helpful information, or the like: a network of recent college graduates.

Since I started my company in 2004, the most valuable lesson I've learned is the power of networking.  And not just surface networking, but EFFECTIVE networking; everything from the meeting, to the exchange of information, to the follow up. Experience has taught me that 98% of the time, it's not about what you know or what you can do, it's mostly about who you know.

Actually, if you think about it logically, that philosophy makes perfect sense. Think about it: If you are in a position to do business or hire someone that you've met personally and have a great report with as opposed to someone that you know nothing about, which one are you going to choose? Exactly!

People are more willing to help and do business with people they know. So it was with this thought in mind that Black/Smith Consulting created the Moguls and Music Speed Networking event.

This event is a fun way for anyone aspiring to do anything in the realm of business, specifically the entertainment industry, to sharpen their networking skills through a series of 2 minute mini-meetings with industry professionals.

As we embark upon our 1 year anniversary of conducting this event, it has been really amazing to see how many people have benefited from it. I mean we are putting aspiring artists in front of music directors of main stream radio stations, presidents of television networks, film producers, GRAMMY award-winning producers, entertainment attorneys, the city's top promoter, club owners and more.

Why? Because we want you to be equipped with the tools you need to succeed.

So if you are an aspiring singer, rapper, writer, actor, film maker, model, producer, or anything you don't want to miss the next installment of Moguls and Music on Feb 11 at Ambiance Ultra Lounge, located at 211 W. Congress in downtown Detroit.

Because remember...it's hardly ever about what you know, it's most often about who you know. 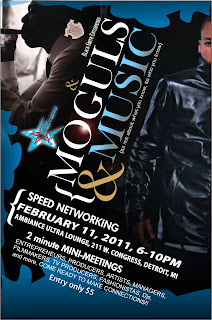 It's great that you are doing this in Detroit. There is such great talent in the city but some artists don't know how to take the first step. I will definitely share this with my artistic friends.

Thank you very much!