Ok, I finally went to see Jumping the Broom today and I have to say that it was a very pleasant "me time" outing.

This movie was produced by T.D. Jakes and starred Paula Patton, Laz Alonzo, Angela Bassett, Loretta Devine, Mike Epps and a host of others, in a story about two star-crossed lovers who, despite their vastly different backgrounds, just want to get married.

While the premise of this film is nothing we haven't seen before, the way in which the story was played out brought a bit of freshness to the whole scenario. A beautiful privileged young woman meets the handsome young man of her dreams that she has been praying to God for, and he not only has the debonaire looks and brains to match, but he is also the sensitive caring type who has pulled himself up by the bootstraps and has a lil something, something of his own to make a girl feel financially secure.

Enter the families and cue the drama.

The wedding is set, the families meet and fur begins that fly. Through it all, the audience sees how fragile relationships can be and why it's important for couples to learn how to cleave to one another and not allow outside influences to come in between them; be it the question of being good enough, a mother's inability to let go of her son or earth-shattering family secrets. 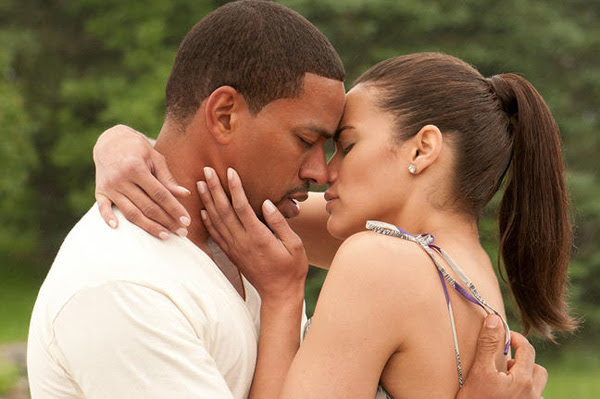 Paula Patton and Laz Alonzo had great chemistry as the leading couple Sabrina and Jason; Angela Bassett was her typical amazing self as Sabrina's mother; Loretta Devine was the perfect overbearing mother; Mike Epps was Mike Epps playing somebody else; Tasha Smith was cool (P.S. it was really nice to see her in a movie where she was playing the typical A.B.W.); and Lil Romeo was...lets just say he's allllll grown up now and looking GOOD.

So all in all I gave Jumping the Broom a solid B+. It's a great date movie and I'm always a big fan of movies that are positive and uplifting. This is a good film to support at the theater so that we can see more like it in the future.

Saw a trailer for a movie called Courageous that is about men being better fathers to their children and I was very touched by that 60 second presentation. So much so that I was moved to tears. I think every man in the world should go see this movie just to support the message that fatherhood is more than a title. So please be on the look out for the new movie Courageous that comes out in September.

Till Death...Do Us Part now available for rental or purchase on Amazon!
Posted by Janaya Black at 5:59 PM No comments: