1-on-1 With Khary Turner, Co-Author of Surrendered: The Rise, Fall and Surrender of Kwame Kilpatrick 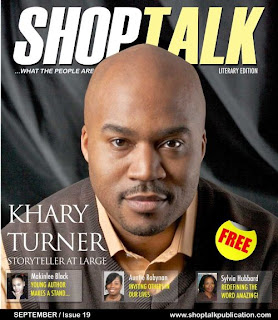 Recently, I had the distinct pleasure of interviewing Khary Kimani Turner for Shop Talk Magazine with respect to his recent project in which he co-authored the book Surrendered: The Rise, Fall and Surrender of Kwame Kilpatrick.

This book has been on everyone's hot list, so I'm excited to present this interview. Enjoy!

The name Khary Kimani Turner is synonymous with hip hop journalism at its best. With everything from music and celebrities to social consciousness and hip hop culture, this man’s ability to skillfully craft the written word to stir emotions, provoke thought and open dialog has garnered him national renown.

After having been a featured writer in notable publications such as The Source, XXL, Vibe, Rap Pages, Metro Times, The Detroit News and Ambassador, this year Turner embarked upon one of the most pivotal projects of his career by co-authoring Surrendered: The Rise, Fall and Revelation of Kwame Kilpatrick, the highly anticipated tell-all book about the scandal surrounding the Kilpatrick Administration, with former mayor Kwame Kilpatrick.

In the midst of the media frenzy surrounding the book, Shop Talk got a chance to chop it up with Turner to find out how it all came about.

Shop Talk: Give us some background about yourself.

Khary Turner: I’m from Detroit; born on Lesure off Fenkell. Raised on the east side; North Park, near Miller Middle School. I remember all of my schools from Gesu/Golightly/Duffield in elementary, to Miller Middle School and UD Jesuit High. Graduated in ’88, earned my bachelors from Xavier University in Cincinnati in ’92, and my Masters last year.

ST: Who or what inspired you to become a writer?

KT: I found hip hop in 1984 and started emceeing. Never stopped; I rhyme to this day. Through hip hop I discovered poetry and short stories in middle school, and opinion columns with my high school and college papers.

The true inspiration was the reaction I got whenever someone read or heard my work. I was a reserved pre-teen, and the written word drew me out and into a more social lifestyle. I found acceptance and uniqueness in that space. It became my thing because while other kids around me liked to rap, or write, or sing, or speak, no one seemed able to do all of those things well. So I committed early on to becoming that man. I’m still driven by that goal.

ST:  How did the opportunity for you to work with Kwame Kilpatrick on his new book come about?

KT: Full disclosure: my wife is a relative of the Kilpatrick family. Through her, I’ve known the former Mayor since 1995. During the summer of 2008, when his scandal began to pique, I was entrenched in my career as a journalist and was also nurturing a desire to write books. Specifically, I wanted to focus on controversial memoirs with some redemptive value. That desire comes from being a black man and feeling like I was born a suspect to so many American communities.

Naturally, the family connection was providential. Mayor Kilpatrick knew me well, and I was close enough to know that another side of his story existed; one that wasn’t being told. So I approached him at a wedding, a bit out of order but, again, providentially. I was just at the right place, at the right time, with the right idea. And I’m thankful that he trusted me with his life story.

ST: How did the experience affect you being that you were in Detroit as his case played out in the media?

KT: It was tough because, in that situation your subject needs to trust you implicitly before anything gets written. To gain his trust, I just spent time around his immediate family [and] got to know them. That time affected me tremendously because I saw his sons respond when forced to grow up quickly. They manned up at age 12, especially when Kwame went away. That floored me. Carlita became the true hero, in my opinion, because she remained upright through the entire saga, and she’s always been brutally honest with me. You’ll never get me to question her spirit.

As a writer, I saw a level of ugliness in the city that I just can’t be proud of.  Journalists have long had thankless jobs, and unfortunately, today’s journalists are groomed in an age of biased media and sensationalism. Before the Joint Operating Agreement, almost 20 years ago, newspapers’ goals were to tell stories. In today’s corporate-driven media climate the job is to sell headlines because headlines sell papers and gain ratings, and sales satisfy and attract advertisers.

So, the journalist is too often forced to compromise and historic storylines lose their balance. I think that happened with Kwame Kilpatrick, and the public suffered because we were positioned to judge the man, and by default the city of Detroit, without having a balanced account on the public record.  That affected my resolve positively because I won’t live in a community that mutes anyone’s voice, but I won’t run.  And so, I committed to helping tell that story.  It was just that important to me.

ST: Did your experience working with him and being able to hear the story from him personally change your view on his situation? How so and did you find it hard to be objective?

KT: Good question.  Kind of. I went in thinking there’s another side to this story; I came out knowing, and thinking, hey, maybe the world isn’t flat after all.

As for being objective, that wasn’t my job. I was co-author, not a reporter, and I was there to help Kwame tell his story. To that end, I maintained my respect for the fact that he was the mayor.  I only call him by his first name because he asked me to, and he and I talked for weeks and weeks prior to writing establishing along the way that I had to be free to challenge him in order for this story to be told successfully. I did that and, to his credit, he never ducked a question. Not once.

ST: What is the biggest thing that you want people to walk away with after reading the book?

KT: Respect for the fact that every story has two sides and there’s nothing you can do about it. You just don’t know everything until you know everything, and to pass judgment based on half the data is to set yourself up to be wrong.

Two, I want people to know that, regardless of your personal politics or preferences, this is a good book. It’s well written, well thought out and told well by two native Detroiters. I’m very proud of that.

ST: What other projects do you have in the works?

I also want to speak publicly. My passion points are media imaging and men’s health. Too many of my peers were lost or sickened young. We in hip hop and the hood are doing a poor job of taking care of ourselves. Proof. Dilla. Blade. Baatin. Bugz. Get better, Hex! I wish these men weren’t examples because I respect them, but I want them to know that I, for one, get the message. I’m heading to the gym now.

Of course, there’s the next book, but I won’t jinx that by going into specifics. 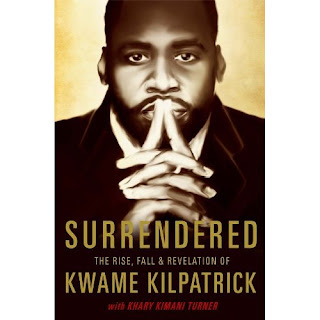 Surrendered: The Rise, Fall and Revelation of Kwame Kilpatrick is now available on Amazon.com, Truth Bookstore, Shrine of the Black Madonna and God’s World.  For more information on Kary Kimani Turner please visit www.kharyturner.com, Facebook at Khary Kimani Turner, or follow him on Twitter at twitter.com/kharyturner.

For more information visit www.black-smithenterprises.com or follow me on Twitter at twitter.com/janayablack.
Posted by Janaya Black at 8:21 PM No comments: