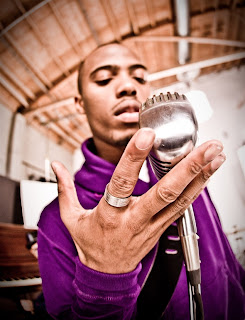 Grand Hustle’s newest prodigy B.o.B, a.k.a Bobby Ray, has officially taken his place as hip hop’s next “it” guy. With a swagger that screams of confidence and a sound that has definitely caught the attention of the masses with his new single Nothin’ on You, the Georgia native has staked his claim and has no intention of letting it go.

The Adventures of Bobby Ray is the name of his debut album that dropped on April 27 and it is chock full of blazin’ tracks with an eclectic mix of music and an all-star lineup of guest appearances. Even Detroit’s own Eminem is in on the action on the remix track Airplanes pt. 2.

During a brief stop through Detroit, B.o.B rocked the stage with a live band and his guitar at the Royal Oak Music Theatre and the FrontPage got a chance to catch up with him to get the skinny on the real Bobby Ray.

Janaya Black: Tell me about your album “The Adventures of Bobby Ray”.


B.o.B: The album comes out April 27. It has Eminem on it, it’s got Lupe Fiasco, Janelle Monae, Rivers Cuomo from Weezer, Hayley Williams from Paramour, its got B.o.B on there…he’s spitting a few verses (laughing). Overall it’s good. T.I.’s on the album and he also produced a few songs on the album. So the album...it’s a pretty dope album. Well rounded.

JB: Does anybody ever tell you that your sound is a little reminiscent of Kanye when he first came out?

B.o.B: I know what you mean; it kind of has like…it’s relative to where the game is and how I’m emerging. Where the game was when he emerged was like this really different style and seemed really organic. You know what I mean? And he’s really frank. Kanye’s really frank and I guess I’m kind of frank also sometimes. But I feel like the comparison’s more so relative to the state that the game’s in and just the new movement that’s taking place.

JB: Your lyrical dexterity is bananas.

JB: Yes, you can use that if you want (laughing). But seriously, what is your whole process of coming up with your rhymes? Is that a practiced thing or is that just a God-given gift?

B.o.B: Well, it’s like when I was a kid, and I don’t say this because a lot of people will write verses, and when I was a kid I would write verses too. I would fill up note books. But I feel like the flow came from free styling a lot because when you freestyle a lot it forces you to just flow. You can’t think about what you’re saying, you just gotta flow and when you feel that feeling…it’s kind of like when a dancer freestyles. They’re just in a zone and they’re not thinking about it; they’re just going. And it’s the same way lyrically. So when I was a kid I used to just freestyle for hours at a time, like non-stop. I would go 45 minutes to an hour. I’d rap to my brother and he’d get so sick of it and I’d just keep rapping and that put the flow in me. 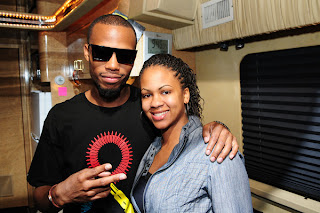 JB: How long have you been rapping?

B.o.B: Since I was about 9. I would record verses in the bathroom on a little tape recorder.

JB: With this first album, what are you trying to say to your fans with your music?

B.o.B: With this album it’s more so a display of emotions. It’s not so much a message that can be put into a line or phrase because it’s such a wide range of things and emotions about how I feel. It’s kind of like my conversation to the fans. If I were to have a conversation with the fans the album would be that conversation in music format.

JB: Did you go to college after you got out of school?

JB: As an artist, I know that you understand that a lot of young people are looking up to you. How do you feel about the whole role model aspect of what you’re getting into now?

Me, I feel responsible in a sense of I want to help people to not have to go through what I went through when I was a kid coming up. And that’s the sense of responsibility that I feel; that my experiences taught me a lesson so, therefore, I have to give that back. I have to give what I learned back to people to help them learn also.

JB: What do you like to do when you’re not on the road?

B.o.B: When am I not on the road (laughing)? When I’m not working…I don’t know! This is sad, I should get a hobby. I’ll say guitar playing because even when I’m not making music I still play the guitar. Like when I go on vacation I bring my guitar with me.

JB: Who inspires you?

B.o.B: It’s a wide range. Artists from John Mayer to Waka Flocka Flame and from Bjork to Snoop Dogg. From Eminem to Cold Play…you name it. The inspiration is wide ranging. I feel like the album reflects that; The Adventures of Bobby Ray reflects all the music that I’ve learned and studied and listened to as a fan.

The Adventures of Bobby Ray is now available in stores. For more on B.O.B please visit www.bobatl.com. or follow him on Twitter at twitter.com/bobatl.